Following on from my previous point about the lack of serious films covering any aspect of motorcycle racing, here is one of the good ones, if not the best. Once a Jolly Swagman is a 1949 British film about the rise, fall and redemption of a speedway champion played by a gorgeous 27-year-old Dirk Bogarde in what I think was his first starring role. This was before his breakthrough in The Blue Lamp the following year as Bill Riley, the edgy thief who fatally shoots Jack Warner’s PC Dixon. It received a BAFTA nomination for Outstanding British Film of the year, narrowly losing out to Carol Reed’s film noir The Third Man starring Orson Welles and written by Graham Greene, which is hardly something to be ashamed of.

Once a Jolly Swagman is set either side of the Second World War. It’s based on the 1946 novel of the same name by the Communist intellectual and writer, Montagu Slater, the founder of the Left Review and the librettist for Benjamin Britten’s opera Peter Grimes. The title is taken from the opening line of ‘Waltzing Matilda’, the Australian bush ballad and unofficial national anthem by Banjo Paterson (1895), which begins:

Once a jolly swagman camped by a billabong
Under the shade of a coolibah tree,
And he sang as he watched and waited till his Billy boiled,
‘You’ll come a-waltzing Matilda, with me.’

In Victorian Aussie slang, ‘waltzing’ meant travelling on foot with a ‘matilda’ (AKA ‘swag’) on your back, a bedroll wrapping your belongings. The ballad tells the story of an itinerant labourer (a ‘swagman’) who pinches a sheep to eat and ultimately drowns himself in a ‘billabong’ (a watering hole) rather than be captured by pursuing mounted policemen, after which his ghostly voice can be heard over the water singing ‘You’ll come a-waltzing Matilda, with me.’ (The Kenneth Williams rendition is fabulous.) This is an elegant title, referring to speedway’s origins in Australia before the First World War. It is also used as the theme for the burnt-out Australian track star, ‘Lagg Gibbon’ (Bill Owen), who takes Bogarde’s character, Bill Fox, under his wing. The song is played over the Tannoy at New Cross, heralding Lagg’s appearance on the track, before finally becoming a dirge as he obsessively plays the record over and over again in a mental hospital after he loses his nerve. 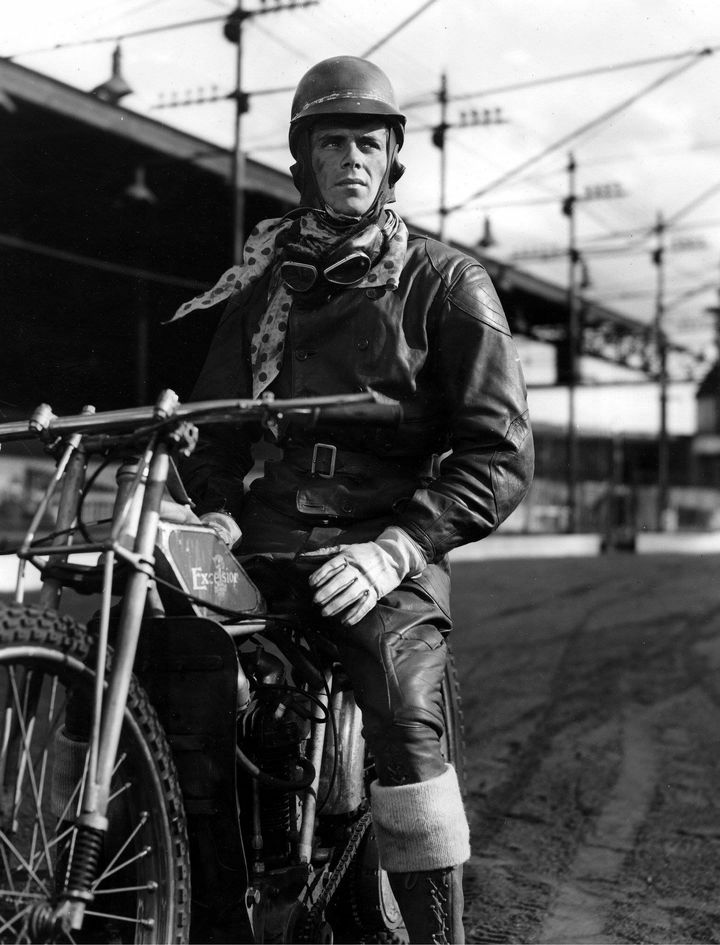 Bill Fox is just as much of a ‘jolly swagman’, a bored, skint unskilled factory worker from a large Cockney family who rides a BSA and dreams of better things. He blags his way into a try-out for the ‘Cobras’ speedway team, managed by cigar-chewing ‘Rowton’ (Sid James), a hard-nosed businessman who fronts the company for its rich owner. Lagg sees potential and convinces Rowton to take Bill on. Bill is so happy he fails to realise he’s just jumped into an insatiable meatgrinder which makes and breaks track heroes in a very fast turnover, as Lagg’s shakes, dodgy leg and obvious drink problem demonstrates.

With a reckless disregard for his own personal safety, Bill quickly becomes the Cobra’s rising star, just as Lagg’s pales. The American title of this movie was Maniacs on Wheels, which doesn’t really do justice to the complex kitchen sink drama but is a pretty fair assessment of those early speedway racers, screaming sideways around a shale track on bikes with one gear and no brakes or left foot peg, keeping themselves upright with a steel boot originally fashioned from old coal shovels. It remains a spectacular sport to this day, with bikes broadsiding around the traditional oval track, churning up great rooster tails of gravel. Lagg’s younger sister Pat, played by the Shakespearean actress Renée Asherson (with an inexplicably cut-glass English accent), hates the dangerous sport but attends every race to support her brother. She nonetheless falls for the handsome and ambitious adrenaline junkie Bill, and the fraught trajectory of their romance forms the main plotline of the movie, all the while driven forward by edge-of-seat and authentic racing scenes.

Unlike the more melodramatic plot of Bernard Vorhaus’ low-budget 1933 British speedway film, Money for Speed, the plot of Once a Jolly Swagman does not shy away from the themes of social class and the polarised politics of the 1930s. In this way, it’s a more serious exploration of the class tensions present in George Formby’s No Limit, only this time between riders and management, rather than working class privateers and posh riders. This is hardly a surprise given the story’s original author, as well as its place in history: set during the build-up to the Second World War and filmed under Clement Attlee’s revolutionary Labour government. These concerns are signaled early in the first act, with Bill’s older brother, Dick, leaving to fight with the International Brigade in the Spanish Civil War. (Later, when Bill becomes the lover of the rich art collecting dilettante Dorothy Liz, played by the glamourous Moira Lister, he is horrified to see a framed photograph of her with two high ranking Nazi officers.) Dick sees speedway as the exploitation of the workers by the elite, who are using the riders like gladiators to satisfy the braying spectators, with no concern for their safety and only a charity scheme for injured riders or, if they’re killed, their families. Bill laughs this off, but after one too many of his teammates are mangled on the track, he sets out to unionise the sport, much to the chagrin of its masters… (I’ll leave it there – you can go seek it out for yourselves to find out what happens.)

There’s a lot to love about Once a Jolly Swagman, and by and large it’s executed very well. (My only problem with it is the pace of the second half of the second act, which whizzes through the war, with six years compressed into a couple of short reflective scenes.) The racing scenes were shot at night at New Cross Stadium, and feel gritty and authentic, with every piece of fancy camera work available to director Jack Lee in 1949 put to great use to emphasis speed and danger; for its time, the film had a large budget to play with and it shows. (Lee would go on to direct such classics as The Wooden Horse, A Town Like Alice, and The Captain’s Table.) The script, by Lee and William Rose, who later won Academy awards for The Ladykillers and Guess Who’s Coming to Dinner, balances the film’s social conscience with some much-needed light relief, for example when Bill tries to get a proper job and mortifies the interviewer at the labour exchange by telling him how much he’s been earning as a racer. There is also a memorable scene in which Bill falls asleep during army dispatch riders’ training. (Bogarde had been in the Signals Corps during the war, before becoming a second lieutenant in the Queen’s Royal Regiment.) Challenged to show the instructor what he’s learnt, Bill throws the War Department Norton around the parade ground like a Hell’s Angel at a beach party.

Bogarde in his early matinee idol period is ably supported by an excellent cast, most notably the women in Bill’s life, Asherson and Lister, the nice girl and the femme fatale, and Thora Hird as his stoic and careworn mother (was that woman ever young?); a young Cyril Cusack as a doomed fellow soldier; and the American actor Bonar Colleano as happy-go-lucky teammate ‘Tommy’. It’s also always fascinating to see Sid James pre-Hancock’s Half Hour and the Carry On films playing it deadly straight, seedy and menacing, while Bill Owen (probably best known as the lovable ‘Compo’ in Last of the Summer Wine) steals every scene he’s in.

All in all, Once a Jolly Swagman, which has surfaced relatively recently on TV and DVD after years in the broadcasting wilderness, is well worth a watch for students and aficionados of post-war British film, as well as fans of speedway and its history. I’ve come across other reviews that seem to find it stiff and a bit clunky, but one has to view these things in their own context. Once a Jolly Swagman is now over 70 years old. It’s not the latest from Guy Ritchie. When one looks at the biker film genre as a whole, which let’s face it is dominated by outlaw and bad boy stereotypes, seemingly mostly written by people who’ve never even ridden a bike, doesn’t it make a change to discover one that actually feels real?

NB. Keep an eye on Sky’s freeview ‘Talking Pictures’ channel for re-runs of Once a Jolly Swagman. It is also available on DVD from Rank/ITV Studios. I picked mine up off eBay for a fiver.